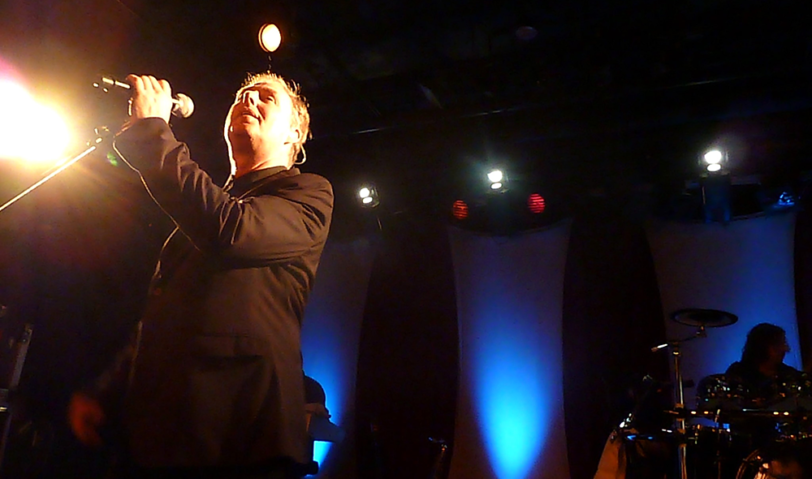 Well I was a bit worried about getting to this show due to the snowstorm that had hit Montreal. The changed flight that I mentioned in the past blog ended up getting cancelled but I was put on the next one leaving 3 hours later. The fear however was that it wasn’t going to leave since the snow was still coming down. Luckily, despite sitting on the runway for almost an hour waiting and getting de-iced, we took off and I landed in time to get to hotel and ready for the show.

Boston itself looked like a hip and trendy town, unfortunately this is only coming from the little bit I saw on the subway and what I would call a tram… a short, 3 car train that often ran along with the busy traffic. LOL, this was the first time I was let off smack dab in the middle of a 4-6 lane street but what was even better, straight across from me was the club! Can’t get any easier than that!

I was really looking forward to seeing Steve and Sally (Mr. and Mrs. Referee) as we had made plans to meet next door for a bit of food and chat prior to the gig. As it turned out, bless their hearts, they surprised me with a birthday cake and card, keeping the celebration going for another day… so sweet! They were lucky to have VIP passes and proceeded to show me pictures and tell me how small and intimate the meet and greet was with only about 20 fans. I told them that was a far cry from Toronto as I had been told the combined packages saw about 70 fans and caused a much more, for a lack of a better word, linear approach to the meet and greet, obviously needed. Since they came over from the UK, I was glad their experience was so cool!

Well when it neared 7pm, we headed back to the club to line up. This venue knew exactly how the special package set up was supposed to work, so much so that we got totally reamed out by an angry and fairly aggressive guard when the rest of us started walking in. We were told to do so by the outside guard and it was funny to see him look at the other guy with a look like “Dude, what’s up? Just chill.”. But eventually we were let in for real and as I entered I saw Sally waving me over to the stage where she and Steve had held me a spot. It was at this point that I realised they weren’t kidding about how small the place was. The stage was about half the size of the previous two nights and the depth of the place was at best 1/3! Add the fact that the stage was very low, (slightly below my waist), and there were no barriers to keep us back and um, well, OH MY! I thought goodness, I wonder if bands get unnerved playing here with the extremely close proximity but for tonight, it didn’t seem to stop either of them! I’m not sure if the gig sold out by the time Oh Land came on but for a tiny crowd, they still knew how to make noise and all three members seemed to enjoy themselves. One of the things I am finding fun is to watch the reactions to everyone else when images pop up on the bands bunch of balloons. They have a small projector type machine that’s pretty well hidden that casts things out to land cleverly onto the balloons… things like the spelling of their name, wolves (saw it tonight for the first time) and the best, a woman’s face that sings along to the backing track… way cool!

When OMD came out, I had to chuckle. Mr. C. was left on his own again but since the place was so small, he barely had to go anywhere as the stage door and his keyboard were within feet of each other. I wasn’t sure how the crowd was going to be compared to the larger ones of early (I’m not good at guessing but if I had to take a shot at it, I would say 400-ish) but as it turned out, they seemed to be loving it. Funny to see a difference in reactions though, much more dancing and jumping around on the stage right side than what seemed to be coming out of stage left (though far off left seemed to be joining in on the fun) but even saying that, I didn’t see anyone who didn’t look like they weren’t enjoying it so… Being such small quarters meant less room for Mr. M to dance and LOL, Sally and I reflexively backed up a number of times. Heck, I even ducked when two hands from behind me reached out to get slapped by him, this was just too funny!

There was a brief mention of previous nights bass problems and hopes that tonight would be better and that seemed to be the case as the white bass of many a day and show (I should probably start calling it Old Faithful) stayed with Mr. M from start to finish. Actually, as a whole the guys seemed to be having an uneventful night in terms of technical problems which I’m sure was a welcomed relief for them!

‘Tesla Girls’ was probably one of two most sung songs… I swear I heard a “Yes, yes, yes” reply back to the guys! When it came time for ‘(Forever) Live And Die’, Mr. H assumed the front man position and did his thing and funny, he often seems so pleased when it goes well, like it ever wouldn’t? I should mention by the time ‘Souvenir’ came up I noticed someone had thrown a bra up on stage. It was hilarious to see and Mr. M picked it up after the song saying “I thought this only happened in Europe”. Hmm, 23 years is a long time, perhaps Mr. H will end up with another collection when the tour’s all over. I just hope they don’t need to be claimed at customs when flying home, could get a bit costly for him.

There was also a lot of clapping from the crowd, seemed to be their thing so of course there was no holding back when ‘Joan Of Arc’ and ‘Maid Of Orleans’ began, hands were up in the air and we were all ready for what came next. It was great even with the limited space, Mr. M made well use of what he had. When the stage was getting set up for them, I noticed that this venue had very small, short speakers vs. the normal 1.5 foot or so high that seems standard. I immediately thought “hmmm, don’t think Mr. M is going to be sitting down tonight for ‘Talking Loud And Clear’! And, nope, he didn’t though he mentioned how, at 4am that morning when they were held up at customs by two officers whose names I can’t fully remember, (Haveir comes to mind for one but not sure) he couldn’t help but think of the song and summer!

‘Locomotion’, the song that seems to find Mr. M and Mr. H continually finding goofy things to do to or around each other was extra fun… a similar comic to what I got caught on camera last year in Birmingham with Mr. M coming up behind Mr. H to joke around. There’s definitely something to be said of the camaraderie that comes out of all the guys, they just truly seem to be enjoying all of this and playing together as a foursome again. For a fan, ya can’t ask for more; its wonderful to see and great fun to watch!

Now if you’ve seen OMD live before, it comes to a point where ‘Enola Gay’, the continual song that signals the end of the set, is combined with the thrill of getting to see/hear it with an inevitable “aww, shoot, almost over” but that, along with the other “awww” song ‘Electricity’ are still huge crowd pleasers and great at eliciting crowd reaction, in the case of Boston, one final chance to bounce up and down and many of us answered the call, When the guys were saying their final goodbyes, though not as bombastic, Boston still sent them on their merry way. A good show to open the American part of the tour with only opportunities to get even better. So tonight’s highlight: well I wouldn’t necessarily call it a highlight so much as something unique to the shows… Prior to the start of the show, the venue started kicking out the occasional cold blast of air. It was cold at that time but once the show started I didn’t feel it anymore, I just know we didn’t seem to all be melting like normal. Well after the slower ‘recovery’ songs of ‘New Holy Ground’, ‘Green’ and ‘Talking Loud And Clear’, Mr. M announces “I don’t know about you but I’m actually cold up here with the air blowing down so I’m going to do some fast songs to help warm me up” How’s THAT for a switch… Mr. M cold? Highly doubt I’ll hear him say THAT again on this tour!

So now I’m training it to NYC and gotta say, I will be happy to have tomorrow morning to actually sleep til a normal time (as there’s no doubt the guys will welcome a day/night off!) And I actually had to grab my sunglasses out of my bag so all is good! OMG, almost forgot, I know this is going to sound like I’m totally losing it but I swear I’m not… twice now when the Amtrak train has slowed down to stop, it sounded like the angelic “aaaaa” at the start of Joan Of Arc! Seriously, I heard it at the first stop but not the next and then I had my iPod going but play list ran out and hadn’t started another one yet so I could hear better and there it was again just now… TOO FUNNY!!! Ok, better end now before I think I see someone wind milling but I truly did hear it! 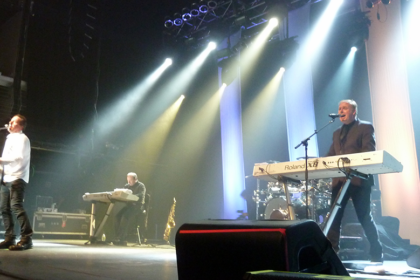 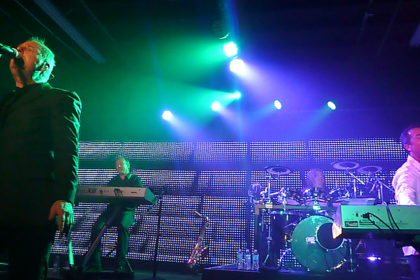 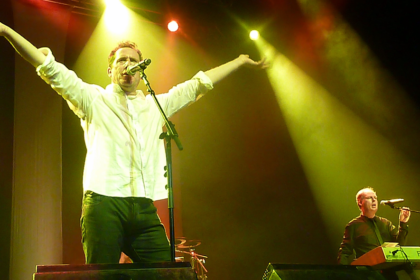