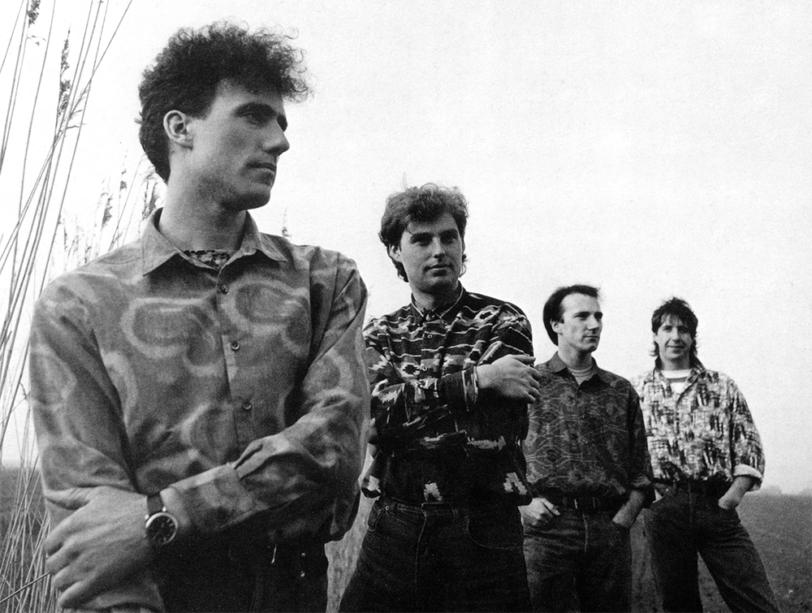 The secret is to fantasize…

The saga of Dazzle Ships is only too well known to OMD fans. Here was a band that was proud of the success of Architecture & Morality, yet felt under pressure to repeat themselves with the follow-up. Andy McCluskey and Paul Humphreys found themselves creatively exhausted and had reached back to some of their earliest work for inspiration.

The subsequent writing, recording and release of the new album Dazzle Ships in 1983 was a sobering lesson for Andy and Paul. Following the end of the album tour they took stock of their situation and began to look at new methods of writing songs and new sources of inspiration. They had grown bored by working in their self-built studio The Gramophone Suite and felt change was needed.

To begin with, the pair headed off to write material separately, but a month later they decided that neither of them had written anything of merit and opted to spend some time at a studio in Scotland, hoping the change of locale would inspire some ideas.

They were still keen to work with the instruments that they’d use for Dazzle Ships, particularly the Emulator keyboard and its sampling abilities. In fact one of the first songs to emerge during this period of writing and composition was ‘Junk Culture’ which had been built around a library reggae sound on the Emulator and a trumpet solo (The ‘reggae’ and ‘brass’ Emulator library sound on ‘Junk Culture’ was also used by Vangelis on the Blade Runner soundtrack). The style of the ‘Junk Culture’ track also had hints of ‘How Much Are They?’ by Jah Wobble, Holger Czukay and Jaki Liebezeit – right down to the dub influence, voice samples and bass flourishes – it could effectively stand as OMD’s tribute to Can! One of the other songs to emerge from these sessions was ‘The Avenue’, largely regarded as an OMD classic despite its B-side status. It’s not difficult to see why with its laboured rhythm track and melancholic chord structure which recalls the Gothic landscapes of the 1980 album Organisation.

The song is built up on a sample of a train in motion which had actually been recorded directly from a TV showing of the 1979 Andrei Tarkovsky film Stalker. The plot of the film concerns The Zone – a strange place patrolled by armed guards. The film’s protagonist has the gifts that allow him to lead people into The Zone to The Room – a place where people’s wishes and hopes come true. Andy McCluskey refers to the film as “One of the most haunting pieces of film and music that I ever saw”.

This possibly had some influence on the lyrics of the song which Andy referred to as dealing with the mistakes that people have made before you and how you can be doomed to repeat them. The second verse concerns Andy’s wish, when he was younger, to fall in love with girls, but how he would then swiftly lose interest.

The low ‘French horn’ synth line on ‘The Avenue’ was actually an out of tune Prophet 5 – Paul Humphrey’s main polyphonic synth at the time. The Prophet 5 was a real mainstay of the classic OMD sound through Organisation and Architecture & Morality for all that brooding Gothic sound. The whistling that ends the track is actually Andy whistling (through his teeth rather than through his lips).

‘The Avenue’ first came to the attention of OMD Fans during the band’s low-key Autumn 1983 tour. This tour was designed to test out some of OMD’s new material in a live setting to see what worked. The live set was a very unusual mix of songs which saw the likes of ‘Junk Culture’, ‘Heaven Is’ and ‘Never Turn Away’ (then untitled) played for the first time in a live setting- and often in radically different versions from the later recorded releases.

After the tour the band retired to work with producer Brian Tench on some of the new material which would later form the basis of the 1984 album Junk Culture. It was decided that some sunshine might help drive the creative spirit (that and the advice that the band should become tax exiles as the royalties from Architecture & Morality were still coming in) and OMD relocated to Air Studios in Montserrat. The band enjoyed the Junk Culture sessions and felt that the influx of new sounds and ideas (particularly calypso beats and reggae tunes) were having a positive effect on their music. The problem was that this radical change in sound left the classical OMD sound of ‘The Avenue’ very much an orphan.

The April 1984 release of OMD’s new single ‘Locomotion’ finally gave ‘The Avenue’ its recorded debut. For OMD fans it was another reminder that the band could craft surprisingly good songs in an understated fashion and ‘The Avenue’ swiftly became a much-loved song which has also remains a timeless classic. From a collector’s point of view it also has the honour of being the first B-side to be released on CD when a reissue of ‘Locomotion’ on the short-lived 3″ CD format was issued in 1988.

The classic status of ‘The Avenue’ is also evident on OMD’s 2010 release History Of Modern where the track ‘New Holy Ground’ reinvents the melody of ‘The Avenue’ (it also re-uses the out of tune Prophet 5 effect) creating another slice of introspective moodiness that captures what OMD are so very good at when the band are on form.

As Andy comments: “It is possibly my favourite OMD song after ‘The Romance Of The Telescope’. It was certainly in our minds when we were doing ‘New Holy Ground’ and ‘Bondage of Fate'”.

Thanks to Andy McCluskey